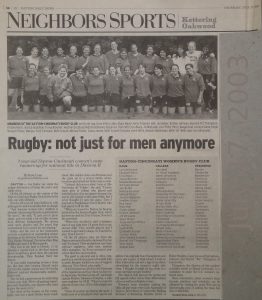 Dayton Area Rugby Club (DARC) first had a presence in women’s rugby in the 1970s. After a new women’s side formed in 1999, DARC and the Cincinnati Kelts joined forces to create the Cincinnati-Dayton Women’s Side from summer 2000 to spring 2006. The team went on to win several Midwest Championships and make three National Invitational Championship appearances. Cincy-Dayton finally reached its goal to build separate women’s teams within their respective clubs in summer of 2006 and DARC women began a new chapter with a new generation of players.

The team boasts several players, past and present, with representation on LAU, TU, National U23, All-American, and National Development Pool.

New Players are always welcome to join, no experience is required!

Practices are held on Tuesday and Thursday’s starting at 6:00pm at the Dayton Rugby Grounds (620 Shiloh Dr).

Games are held on Saturday’s at 11:00am and our home field is the Dayton Rugby Grounds. Check out our schedule here.